One of these stamps featured in my recent post about the strange preponderance of fondue on stamps lately. (I’ll give you a hint: it’s the one with the people eating fondue on it.) The stamps follow the same six themes: fashion, food, language, events, music and leisure.

I was too young to take in the 1970s as the tail end of them happened around me, and I’ve gotta be honest, it’s never been a decade that held much retro appeal to me (outside their contribution to the ongoing development of David Bowie, of course). I mean, look at those flares! And that green. Ugh!

But I do love the riotous colours on the rollerskating stamp. (Not so sold on rollerskating itself, I have the X-rays of my shattered radius to prove it.)

And I’m sure there were probably bigger ‘events’ in the 1970s than the arrival of home video recording, but I reckon I can see what happened here: Jersey Post got to the 1970s and realised they really should have had a ‘technology’ stamp. Either that, or they took a look at the 1970s as a whole and concluded, as I did before them, that the 1970s were a bit depressing. Still, those curved stripes… I can’t find an exact correlation, but they take me back to the kinds of animations I was watching as a kid during the era. Sesame Street’s Pinball Number Count, anyone? And again, those colours! I think my dad’s shirts of the era were made out of this video tape. 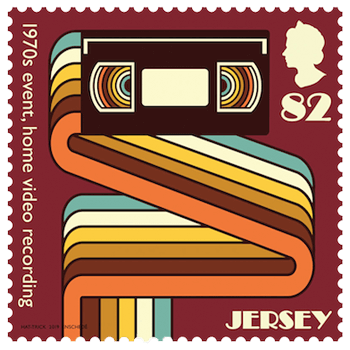 As with the previous sets in this series, the 1970s Popular Culture issue includes a scene depicting Street Life of the 1970s. Do not adjust your screen. It seems that life in Jersey in the seventies was very, er, pink. 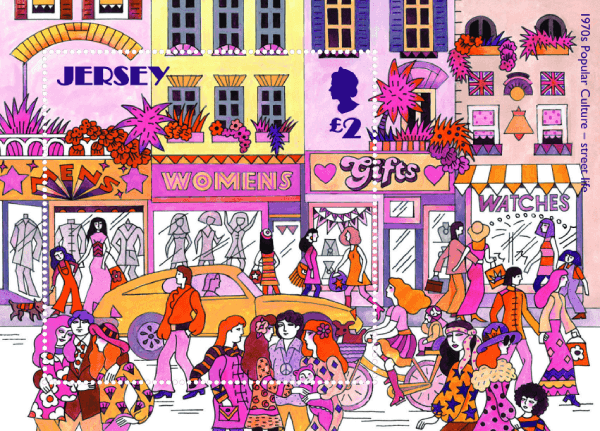 But of this set, how could this not be my favourite stamp? It doesn’t really say an awful lot about the Punk movement (I admit, another worthwhile contribution from the 1970s). It could symbolise angry seamstresses. Which leaves only one other possible option. It is clearly a tribute to the one other great moment of the 1970s: the birth of the Punk Philatelist. They even used the same queen that I use in my imagery! Thanks guys. And if you think this doozie isn’t going to show up on a regular basis in my social media, you’d be very wrong.

I’ve only just learned that this is merely the third of a 5-part series. (I totally missed the 1950s series.) Needless to say, as a child who became fully aware of the world on the cusp of the 80s and 90s, I am already VERY excited for the next two installments.

5 thoughts on “That ’70s Showstopper”