So I look away for one moment and suddenly everyone is putting fondue on their stamps. And by ‘everyone’ I mean mostly Switzerland, but also Jersey.

Switzerland can be forgiven. Fondue as a mainstream dish is a surprisingly recent development in cuisine, but it’s theirs, and it’s a thing of national pride. Back in the 1930s, sitting around dipping stale bread into a pot of melted cheese must have been a fun way to pass a cold Alpine evening while discussing in four languages how the nearby rise of fascism left you feeling completely neutral.

Designed by Francisco Rojas, this December issue from Swiss Post celebrates fondue – not a history, as such, but just the mere existence of the dish. There’s a stamp with fondue on it, naturally, but also a stamp with cheese on it, or as I like to think of it, fondue-in-waiting. And as you can see, they’re both as big as a mountain, which is also how I like my cheese, so respect for that.

You can also get this quite awesome miniature sheet featuring six of both stamps hovering above a giant fondue pot (or caqueron, as I’ve just learned a fondue pot is called. Must remember that next time I’m playing Scrabble). It even features a recipe for fondue in four languages. (Apparently it involves more than just melting cheese! Who’da thunk it?) 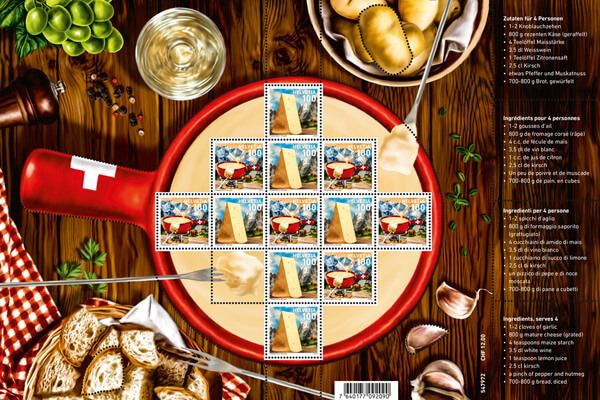 This is not even the first time the Swiss have put fondue on a stamp. A 2014 issue honoured Garfield. You know, the cartoon cat Garfield, famously remembered for his love of eating… um… fondue? OK then.

Then there was the 2000 release celebrating ‘souvenirs’, and featuring a number of Swiss scenes depicted inside snow globes. Take a look inside this one, I bet you’ll never guess… 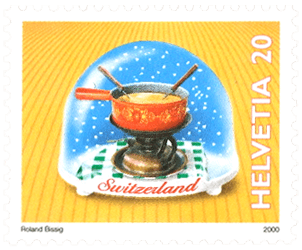 If at this point you’re thinking of starting a topical stamp collection just on fondue, I can’t blame you, and it’s possible that this blog post will function as your complete catalogue. In which case it’s only fair to mention that fondue also popped up in one of what the Netherlands calls its ‘Decemberstamps’ in 2014. Apparently it’s something the Dutch like to do for Christmas – skewer some melted cheese and then sing Gouda King Wenceslaus. Thank you. 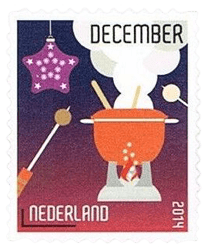 So let’s turn to Jersey. Not content with taking out number 1 position in my recent 12 Stamps of Christmas countdown, it’s also jumping into the philatelic fondue pot. A year ago I mentioned Jersey’s far-out acid-inspired 1960s popular culture stamp issue. Well, there’s a 1970s follow-up now. I’ll save the detailed look for another post because it makes me happy for a whole other reason, but here’s the entry under ‘1970s food’: 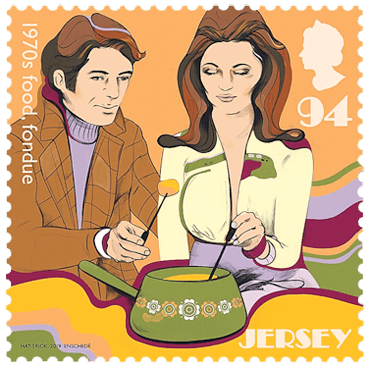 This stamp resonates with me on a deeply personal level. Gathering dust in the back of a cupboard in my childhood home was a strange, orange-brown ceramic pot that sat on top of its own burner. It was never used; it had been a wedding gift to my parents, who were married in 1972. ’Nuff said. Many years later I came to realize that it was a fondue pot; this week I learned it was technically a caquelon. (Minimum 72 points if I land the C and N on triple word scores, plus 50 assuming I use all my letters.)

I do love this stamp. Those colours, those fashions… it looks like a cover on the kind of romance novel my Mum was reading in the 1970s while she was busy not using her caquelon. It looks like a bad date. That poor woman, patiently stirring her stale bread through her fondue, while her polo-necked companion smoothly slips his hand somewhere that’s probably not good and mansplains why Simon and Garfunkel aren’t getting back together anytime soon.

But let’s consider this stamp in the light of the Swiss issue just weeks beforehand. A cuisine that to Channel Islanders (and most of us in the English-speaking world) represents pure nostalgia, a laughable, long-burned-out fad – can you believe we used to sit around melting cheese in a pot and dipping bread into it? – remains a proud and vibrant part of a culture not even a thousand kilometres away.

How many other proud cultural customs have been embraced and then dispensed with elsewhere in the name of fashion? Centuries of tradition cheapened and discarded in favour of something equally old and yet temporarily more now. Futons, hula hoops, dreamcatchers, the Macarena… which cultural institution will be the next to be laughed off as a wacky, embarrassing fad? It’s time to take a stand against this mindless cultural appropriation.

I wonder if Mum still owns her caquelon.

4 thoughts on “Fondue is big this year”