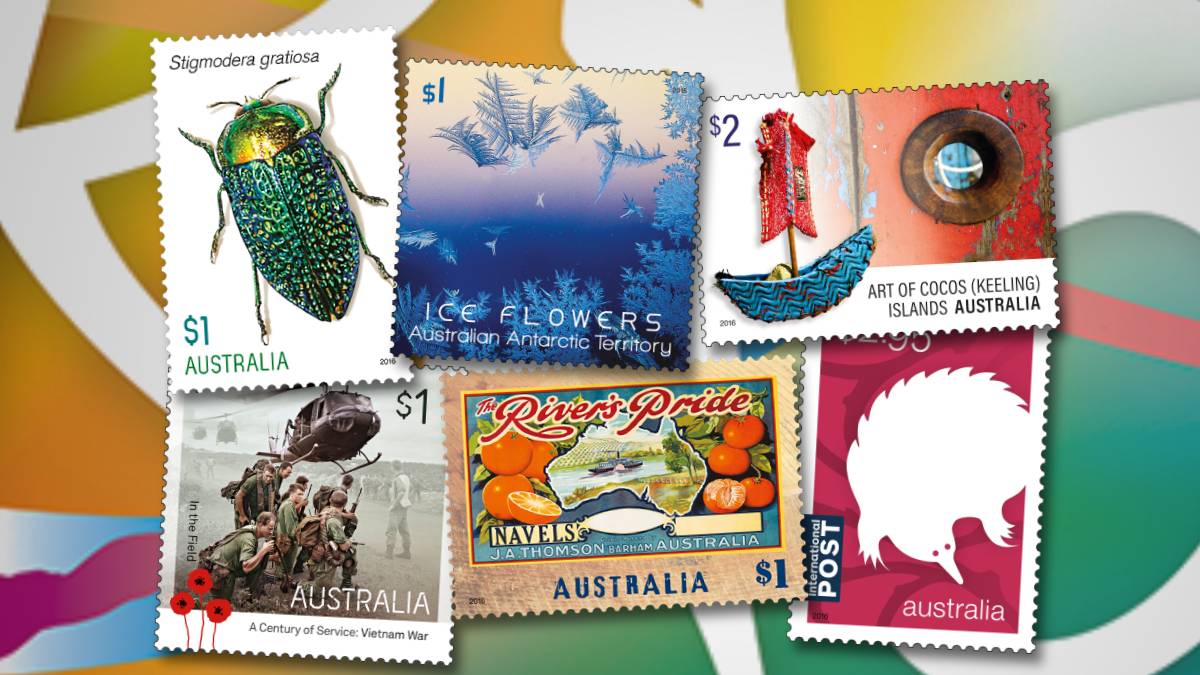 …In which I attempt to cover a year of review and bitching in one fell swoop.

Each year, Australia Post holds its annual survey in which stamp collectors can vote for their favourite – and least favourite – issue. This used to be an exercise on paper, with a few variations on a simple ‘What was your favourite?’ ‘What was your least favourite?’ type arrangement, with prize giveaways for random winners. Now it’s gone all high-tech, with a detailed SurveyMonkey page, in which all issues must be ranked in order from 1 to 32.

On the upside, I enjoyed the OCD-triggering task of putting every single issue in its rightful place. On the downside, no prize giveaways. I guess AP has to pay for its CEO’s $4.8 million pay packet somehow.

I could swear I saw the final results somewhere, but I can’t seem to Google it anywhere, and the survey I’ve linked to above still seems to be open. Surely I’m not so lame that I dreamed it? I saw it in such detail! Maybe I was shown the running tallies when I finished the survey? Anyway, this isn’t your problem. The important thing is that I am going to tell you which were the best stamps and which were the worst, as judged by my own brain, so survey results don’t matter.

In no particular order (and with each issue’s title linking to the extremely commendable Australia Post Collectables blog site for more info), Australia’s unquestionably best issues were:

Nostalgic Fruit Labels. I wrote a whole post about them here. ‘Nuff said.

Ice Flowers. It must be challenging to come up with Antarctic scenes that aren’t just more penguins, glaciers, icebergs and scientists. I loved this gorgeous set depicting ‘ice flowers’, the unique patterns formed by water droplets on Antarctic windows. The photography is just magnificent.

Art of Cocos (Keeling) Islands. I very nearly missed this one, released during a busy time of year for me. This survey forced me to consider it afresh. The subject matter is wonderful (art AND nautica, two of my greatest loves) and the stamps have a vivid, almost tactile appeal. I’m sorry I wasn’t around to give them a bigger plug at the time.

Jewel Beetles. These are stunning creatures in real life, and the plain white background combined with a clever use of reflected light brings out all their lovely shininess. My undoubted favourite issue of the year, and another one I was sad to miss here on the blog.

A Century of Service: Vietnam War. Australia Post has really ramped up its military output lately, dare I suggest with an eye on the wallets of the many old-man collectors out there. I’ve found many of the war issues underwhelming. I can’t deny their poignancy, but at postage-stamp size, those historic sepia photos tend to wash into one another. But I like how this issue pays tribute to those who served, and does so while capturing the times in those distinctive washed-out colours of 1960s photographic prints. One stamp even bravely dares to acknowledge the opposition to the very war it is commemorating. Noble and evocative.

Let me digress for a moment. Here in Australia, there exists a television legend by the name of Molly Meldrum. Molly is a man. Long story.

Molly hosted an iconic music show in the 1970s and 1980s, helping to break all kinds of now world-famous names into the charts. But I missed his glory days. By the time I was old enough to know him, he was hosting a music segment on a fading Saturday night variety show called Hey Hey It’s Saturday. In this segment, it seemed to me that he would talk up whatever piece-of-rubbish single some record company hack thrust into his hands, happy to promote anything in the hope that it might turn out big and prove he still had his Midas touch. I came to value and love Molly retrospectively for his work in his heyday, but from his HeyHeyday, I learned that one’s praise counts for nothing if one praises everything.

With that thought in mind, it is my solemn duty to pronounce my least favourite Australian issues for 2016.

Australian Animals – Monotremes. Credit for trying something different, but lost in the execution. Designated for international mail, I’m sure these are destined to confuse our overseas friends more than delight them. And I wouldn’t wear those colours. (Trivial fact: monotremes are mammals that lay eggs, and their eggs, poos and wees all come out of the same hole. You’re welcome.)

I’ll have a proper rant about this someday, but here’s a head start for you. I know winning an Olympic gold medal is rather good, but these stamps are nothing but a shameless cash grab aimed at a jingoistic nation whose adulation of sportspeople is only slightly more embarrassing than its wilful disrespect of knowledge and discovery.

We hand out stamps like anxious parents at school sports days hand out ribbons to kids just for showing up. Rant over.

Nerd note: any of these stamps used on commercial cover are scarce as hen’s teeth. Stash.

Respect to these two gold medallists: Chloe Esposito for winning in a sport most Australians have never heard of, and Mack Horton for calling a Chinese drug cheat a drug cheat.

Road to Rio. Somewhere between a corporate logo and the background to a breakfast TV show.

Christmas Island Lunar New Year: Year of the Monkey. I’ve written before about Lunar New Year issues. The greens and purples are nice, but I just can’t get into the designs of this cycle. How many more years to go before the new ones kick in?

OK, awkward part over. And… relax.

If you want to take part in the survey, head here [it’s closed now]. When I either saw or imagined the results, the Vietnam War issue won. We’ll find out soon if I did see the results somewhere / am psychic.

I’d be delighted to hear your thoughts on these or any other issues from 2016! Or, you know, just life in general. x

Update! The official results of this survey can be found here!