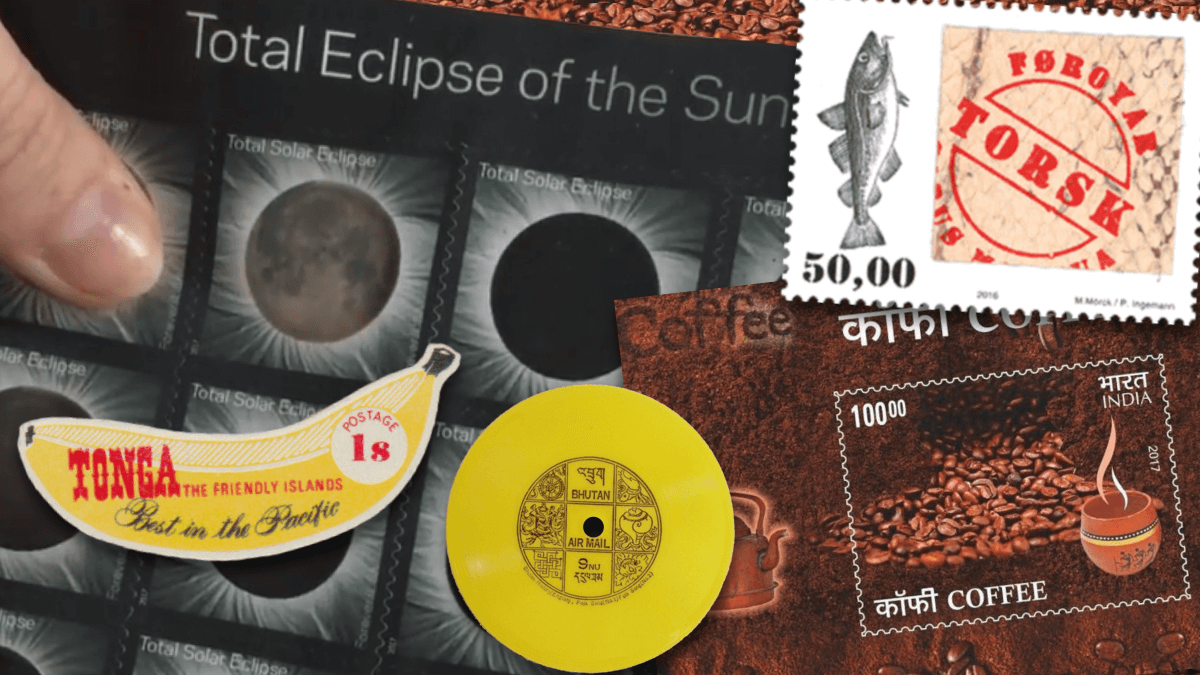 (And yay to you if you know which film lent me that headline.)

I’m excited today, and not because I’ve been snorting lines of this coffee-scented stamp from India. It’s a big day. I’m launching a new tag on this blog.

I get very easily excited.

As the use of snail mail for letter post continues to fall off a cliff, postal authorities around the world look more and more to stamp collectors to fluff up their bottom line.  Thus opens a new and technologically marvellous chapter in an old book: that of the novelty stamp.

Novelty stamps have been around for a long time, from Tonga’s banana-shaped issues to the brightly-colored playable vinyl record stamps issued by novelty stamp pioneer Bhutan. (You can listen to one over at The Vinyl Factory!)

It was Bhutan who first issued a scented stamp, too, in 1973. Now you can Google ‘scented postage stamps’ and take your pick of jasmine, sandalwood, rose, chocolate, and sweet and sour pork. India’s coffee issue this year wasn’t even the first ever coffee-scented stamp (e aí Brasil?).

Novelty stamps are made to be collected. Only a small proportion of them make themselves postally useful by being stuck on envelopes (fewer now than ever.) They rarely go on to be rare or particularly valuable.

And that’s the thing about these stamps. Modern scientific wizardry produces masterpieces of interactive art that evoke tiny moments of delight in the most hardened of hearts. The Faroe Islands probably always wanted to put tanned cod skin on a stamp, but before 2016, the technology simply didn’t exist. Now they have been able to delight people who are into fishing, or at least the smell of cod.

In August 2017, all American eyes were on the solar eclipse – viewed through protective lenses, of course, unless you’re some kind of idiot. Am I talking about Donald Trump? Or the people who were treated for putting sunscreen on their eyes? You be the judge. And don’t hold back. Judge like you’ve never judged before.

The USPS released a stamp in June to mark the impending eclipse. It came in a sheet of 16 and featured a big black circle:

But that’s not just any big black circle. That stamp was printed with thermochromic ink. When pressed with a finger, the ink reacts to the heat, and turns transparent, revealing… A FULL MOON! Allow Instagram user danimaslan to demonstrate:

That is the classiest reveal of a full moon I’ve seen since Tim Hartford ‘dropped’ the certificate he’d just received at Speech Night and bent over to pick it up, only to experience a wardrobe malfunction in front of the whole school and their parents. He was suspended for a week, but he won five bucks from me and everyone else in our class.

When the stamp ink cools, it reverts to black, which interestingly is not something I can say about Tim Hartford’s bum.

This is, of course, a gimmick, albeit an impressive and completely appropriate one. Respect to astrophysicist Fred Espenak for his full moon, and to designer Antonio Alcalá for his art direction.

For mine, the best part of gimmicks like these is seeing reactions like this from people who are probably not nerds:

Welcome to the greatest hobby in the world, my friends! PLEASE STAY COME ON JUST FOR A LITTLE WHILE WE WON’T HURT YOU LET’S BE FRIENDS

Ahem. This post inaugurates my new tag, novelty stamps. Keep your eye on it for future philatelic nonsense. Australia’s wooden stamps of 2015 – not even the first wooden stamps in the world – have previously been mentioned on this blog, as was New Zealand’s glow-in-the-dark glowworm issue. I’m retrospectively tagging them in.