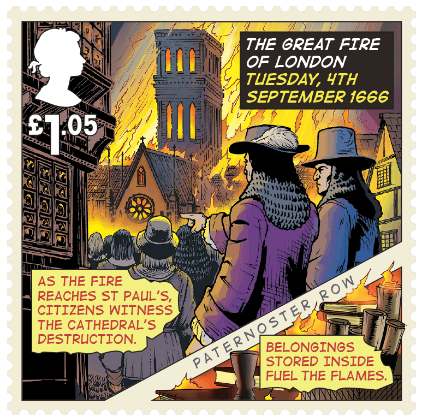 Here’s a stamp issue I just have to share with you before 2016 becomes too tiny in the rear view mirror. It was undoubtedly my favourite release out of any that caught my eye last year. And you don’t have to be a stamp nerd to love it, though it’ll help if you are a history buff, comic book geek, or pyromaniac.

The UK marked the 350th anniversary of the Great Fire of London in September 2016. And appropriately, it was smoking. (To bring out the full vivid detail in the 6-block above, I would have killed your data. I’ve selected a few favourites below and depicted them bigly™.)

Where to even begin listing the awesomeness? Let’s start with the most obvious aspect: it’s a comic strip. Designed by British comic book artist John Higgins (brief CV: Batman: The Killing Joke, Judge Dredd, Watchmen), it brilliantly co-opts the traditions of that art form to simultaneously engage the eye (those colours! that detail!) and narrate the story.

(Comments from the designer usually accompany the PR effort for any stamp release. Normally it’s ‘what a great honour, I have always loved the spotted marmoset’ blah blah blah dreary corporate puff. Higgins said of this brief, “I was sworn to secrecy. I could only tell people once I had killed them.” A definite lifting of the bar. Designers take note.)

The tale told in the text remarkably blends the great and the personal. We are engaged with the Farriners’ escape from the first moment. I feel a palpable sense of heartbreak when the cathedral goes up and takes locals’ belongings with it. One can imagine how truly the people of the time would have placed their faith in the great cathedral as a sanctuary from the flames.

I adore how the streets of the London map frame the multiple panes on each stamp while locating the action to precisely where each scene took place. My favourite touch is the point-of-view depiction of the arms tugging on the ropes in the Monday stamp. It’s positively 3D! ..ish.

The issue comes with all the usual add-ons, including a Presentation Pack designed by graphic novel artist Leigh Gallagher depicting the Great Fire in more detail, and in the same comic book style.

Lately we’ve seen a plethora of comic-themed stamp issues that rarely transcend the basic concept of character portraits and action shots. (I’m looking at you, USPS.) This issue demonstrates the enormous potential in telling entire stories in comic art on stamps. It’s a match made in heaven. A few more of these and a whole new generation of collectors might be born.

Side note – what happened to stories on stamps? I feel like there were a lot of them when I was a kiddie collector. Biographies of actual or literary characters, or verses of bush ballads. (It’s an Aussie thing.) I’m sure I don’t see many these days. Are they out of fashion thanks to some design theory with which I am unfamiliar? Bring stories back, I say. Surely if one landed in your mail, you’d want to collect the set to see how it ends?

So an absolute Respect to all involved with this release, from the Royal Mail for running with such a refreshing approach, to artists Higgins and Gallagher, to The Chase Creative Consultants, for doing whatever creative consulting is.

If this sort of thing sets you on fire, please like, link, share, and generally big me up to your friends. Let’s find each other on Facebook, Twitter, and Instagram! Thank you so much!
© Philatelic product images remain the copyright of issuing postal administrations and successor authorities