Due to general busy-ness I’ve missed a few Australian releases of late. But I thought Aussie Post did a decent job of the Centenary of the Anzac landing, amid the appalling jingoism currently en vogue down under. No doubt they’ll release some hideous and overpriced Anzac-themed ‘Impressions’ products at year’s end, but we’ll cross that bridge when we come to it. Then we’ll blow it up behind us so the Germans won’t get us.

Speaking of pointless allegiance to Empire, let me introduce my international readers to an amusing Australian tradition: our annual celebration of the Queen’s birthday! 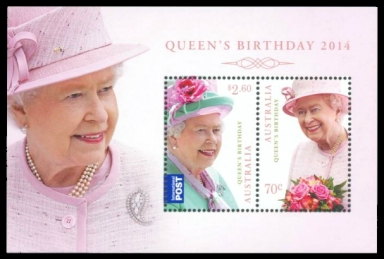 The Queen of whom I speak is, of course, the Queen of the United Kingdom. She’s technically also Australia’s Queen, though she mostly phones it in from London while a designated local lickspittle does the hard work of cutting ribbons at hospitals.

The custom of marking the monarch’s birthday with a holiday dates back to Australia’s earliest days as a British colony, in 1788.  We don’t mark the current Queen’s actual birthday in April; strangely, after King George V died in 1936, we decided his birthday (or a Monday thereabouts) would stand in for all future monarchs’ birthdays. And who wouldn’t want to celebrate her birthday while everyone stands around mourning her dead grandfather? (Due to a surplus of public holidays, the state of Western Australia doesn’t celebrate it in June with everyone else. They hold the Queen’s Birthday holiday in September or October, when the year has been long and they really need a day off work.) 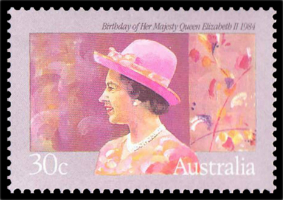 While the holiday’s been around in Australia for as long as white people, stamps have only been issued since 1980, apparently in response to demand from monarchists. Really? If I were on my deathbed, as most monarchists surely are, I’d be demanding something far more important than a stamp for the Queen. Like a blunt, for example, or a chance to rethink my retrograde political opinions and embrace the notion that another country’s monarch is irrelevant to a nation half a planet away in the 21st century. But that’s just me.

Australia Post’s graphic design department must draw straws to see who gets to design each year’s Queen’s birthday issue.

“Same as the last 35 years: the Queen, flowers and stuff, pinks and blues, and try to not make her look like she hired MI6 to knock off Princess Diana.” 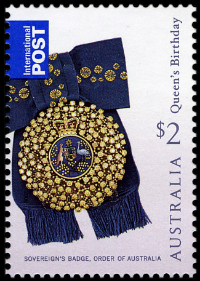 Queen’s Birthday stamps are reliably some of the dullest Australian stamp issues each year, though I don’t blame the designers for that. How do you design a dignified stamp of a respected elderly lady, whose face has been on a thousand stamps already, when you’re not allowed to frighten the frail elderly relics in the target demographic?

No wonder Queen’s Birthday stamps usually go for a photo of the modern-day Queen and some flowers. But sometimes they’ll go retro, or they’ll use a painting instead of a photo, or they’ll depict some regalia or other symbol of the monarchy apart from the actual monarch.

But credit where it’s due. Given the restrictions, I think Aussie Post has done a quite lovely job of a Queen’n’flowers issue this year. Looking at this minisheet is like visiting your grandma’s house: warm, familiar, and you spend all your time trying to work out if her eyes have always been that intense shade of Photoshop Blue. 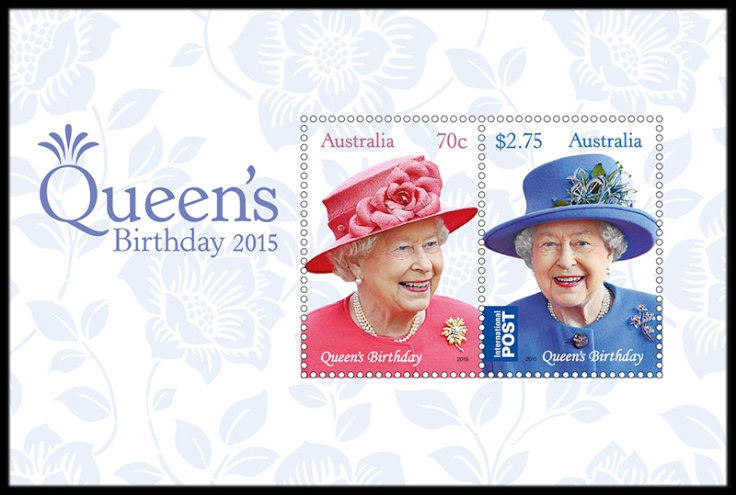 In the interests of free speech, you can also read about this issue at a royalist blog. It was there that I was reminded that this issue also includes a prestige booklet “showcasing selected hats from the Queen’s royal hat collection.” Well, who am I to judge others by what turns them on?

This is the second Queen’s Birthday issue after a few years’ hiatus, while the Diamond Jubilees of QE2’s ascension and coronation were celebrated. Even as a republican, I thought some of those Jubilee stamps looked fantastic. I swallowed my pride and used those giant embossed gold carriage sheetlet stamps on my mail for a year. I hope my recipients appreciated the effort.

For all this treasonous talk, I’d like to make clear that I bear Her Maj no personal ill will. What a life she would have had. I’d love to meet her. She’s a collector too, so we could compare notes. She probably reads this site! Look me up, Lizzie. We should totally neck a bottle of gin each over some gal talk in the Palace.

Oh, and happy your Grandpa’s birthday!

2 thoughts on “The Queen isn’t dead. Long live the Queen!”