January 26 is Australia Day. (For foreign readers, Australia has no Independence or Revolution or Treaty in its history, so we just named our national day after ourselves.)

Australia Post began marking Australia Day in 1978, usually with a theme of settlement, Aboriginal culture, art, or patriotic symbols. They were generally attractive designs, even if some of the early ones reek of imperialism. A superb run of supersized stamps in 1994-7 depicted modern Australian art, and 1982 must surely feature the first appearance of the hijab on an Australian stamp.

The Australia Day stamps will make an interesting blog one day, but for now, let us simply love how much these ‘flag’ designs reflect their era.

1987: Stand back everyone, here comes THE FUTURE

The Legends are born

The final official ‘Australia Day’ release in 1997 coincided with the first annual Australian Legends issue, in which AP honours Australians who have achieved things. It broke a long-standing rule that the British royals were the only identifiable living persons depicted on Australian stamps. It’s a risk putting a living person on a stamp, because one never knows how they might yet disgrace themselves. Luckily, notable Australians never turn out to be pedophiles.

Unsurprisingly, the first Australian Legend was cricketer Don Bradman. John Howard was still PM, so The Don no doubt appealed both for his batting prowess in the olden days and his exploitatively low payments to players in the 1970s.

(Nerd note: This issue was re-released with an additional inscription when The Don pulled up stumps in 2001.)

Since then we’ve had performers, writers, scientists, femmos, Anzacs, cooks, do-gooders, musos, and naturally plenty of sports stars because STRAYA! This even includes a couple of footballers still playing. Good luck with that AP. Fingers crossed for you.

Historically, Punk’s biggest problem with the Australian Legends issues are that they can be some of the dullest releases on the calendar (see my comments about the Designers in my last post). I can understand why. Doubtless there is a limit to how much a graphic designer can do with a prestigious portrait stamp. There’s also a tendency towards black-and-white photographs, particularly with the sports stars, and I’d guess that’s because they’d rather depict these great Australians at the height of their strength rather than as the wrinkly old people that they are now. We’ve seen a bit more colour in recent years as many of the Legends have been younger.

As an inner-city latté sipper, it’s hard not to roll my eyes at some of the subject selections in the past, but then, for every swimmer, there’s been a notable feminist, or AC/DC.

Yes, I’ll have a VB chaser with that latté, thank you, and let’s not mention anything about alleged threats to kill.

AP likes to keep the identities of each year’s Legends a secret. I suspect it wants the general public to await the announcement with bated breath each year, like it waits to find out who’s going to host the Logies. I’m quite sure the general public doesn’t give a rats’. It must be an inconvenience for designers and printers, who probably have to sign confidentiality agreements on pain of death. And collectors of new issues are left without their usual heads-up in AP’s Stamp Bulletin, scrambling to catch up after the release.

And the winners are…

So the big reveal happened this week (did you notice?) and this year’s Legends are… drum roll please… recipients of the Victoria Cross!

This issue honours the four living VC recipients, plus Cameron Baird, who was killed in Afghanistan during the action for which his Cross was awarded. This marks the melancholy milestone of being the first time an Australian Legend stamp has honoured a deceased person. AP’s publicity says “He has been honoured as an Australian Legend as a mark of respect to his courage and to that of all 100 VC recipients.”

(Edit and nerd note: jockey Scobie Breasley died less than a month before being named a Legend in 2007, but was certainly alive at the time the issue was planned. The stamp was issued anyway.)

The other newly crowned Legends include Keith Payne, who also featured in a 2000 stamp issue on the Victoria Cross centenary. That’s him on the right. He must be getting used to licking the back of his own head.

Design-wise, this year’s issue is a winner. The photographic portraits are engaging and intimate, and the medal fills out that top left corner nicely. The colours are attractive without being gaudy, and it’s an accidental bonus that the ribbon’s dark red goes nicely with the khaki. Not sure about the ‘100’ in the background of the late Corporal Baird’s stamp, but I suppose AP has to protect themselves against complaints that other VC recipients have been forgotten.

The stamps got a smattering of publicity on their release, but less widely reported was the related minisheet featuring the Legend stamps on a background listing the names of all VC recipients, designed to resemble a bronze plaque like those found at the National War Memorial. Keep this in mind if you need to pay $3.50 or more in postage in the next few weeks. The post office desk bunnies will be confused if you ask for it, but you’ll find it in the Stamp Collecting section and you can totally buy it, open the packet and slap it on your mail.

Or if you need to spend $5.70 or more, why not try the kinda-related First Victoria Cross minisheet that has been released for almost no discernible reason except to make collectors spend more money? And they will too – it’s based on a Victorian colonial stamp that used an image of the VC to raise funds for the Boer War. This is known in the industry as putting ‘stamps on stamps’ and is a surefire way to put a smile on a collector’s face. 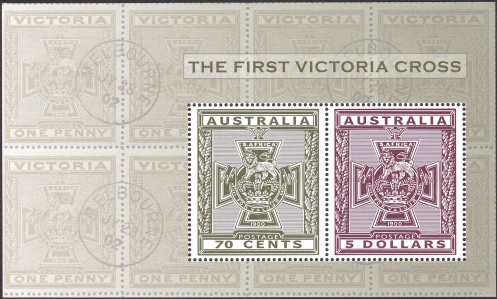 Back to this year’s Legends, and without detracting from the achievements of these soldiers, let’s also acknowledge the unsavoury aspect of an issue like this. There is an element of Australian society that fetishises the military, and not in a good way. Whether they like it or not, VC winners become poster boys for these types, and I can’t help but wonder how much it inadvertently reinforces that ugly social mindset, the one that strangely also tends to involve the belittling of women and mistrust of foreigners. It’s that demographic that has our politicians so keen to be photographed in the cockpit of an F/A-18 and to cynically declare a humanitarian issue like boat people a ‘war’. Which, really, is totally insulting to any VC recipient, given the genuine dangers and ACTUAL war they faced with such courage.

And as I mentioned above, there’s always an inherent danger when you put a living person on a stamp. Sure, many Australian soldiers I’ve met seemed like good blokes who would treat a lady properly and get her home safely while exchange pleasant conversation with the taxi driver in his native language. But if it should ever come out that any stamp-honoured soldier crossed a line in the course of duty, then Australia Post may come to regret being so keen to embrace men in uniform.

But keen they are. AP is clearly well aware that on a Venn diagram, the Military Enthusiasts set and the Stamp Collectors set enjoy a large union. *Cough old men cough* And that’s why this issue has also been filed under The Con Cow.

The Con Cow shows up whenever collectors are being gouged for money by postal authorities eager to boost their bottom line. As post offices are increasingly forced to justify their existence with profits, collectors have increasingly been milked.

Knowing how keenly collectors of militaria, and Aussie patriots in general, will snap up this issue, AP have brought their cash-cow-milking A-game.

Buy the set of five stamps! $3.50. Buy the minisheet! $3.50. Buy a booklet of 10 stamps of your favourite recipient! $7 x 5 = $35 (or the official Booklet Collection for $37). Buy the gutter strips, showing the medal plus an excerpt of that recipient’s citation! $7 x 5 = $35. And if you’re REALLY Australian, you’d buy a chequebook for every Legend. (One chequebook is 20 booklets of 10 stamps. One of those should last Keith Payne right through until they put him on another stamp.) So that’s $140 each x 5 = $700. And let’s not forget the usual maxi cards and first day covers and stamp packs and claptrap, all at extra cost of course.

Lest we forget profit.