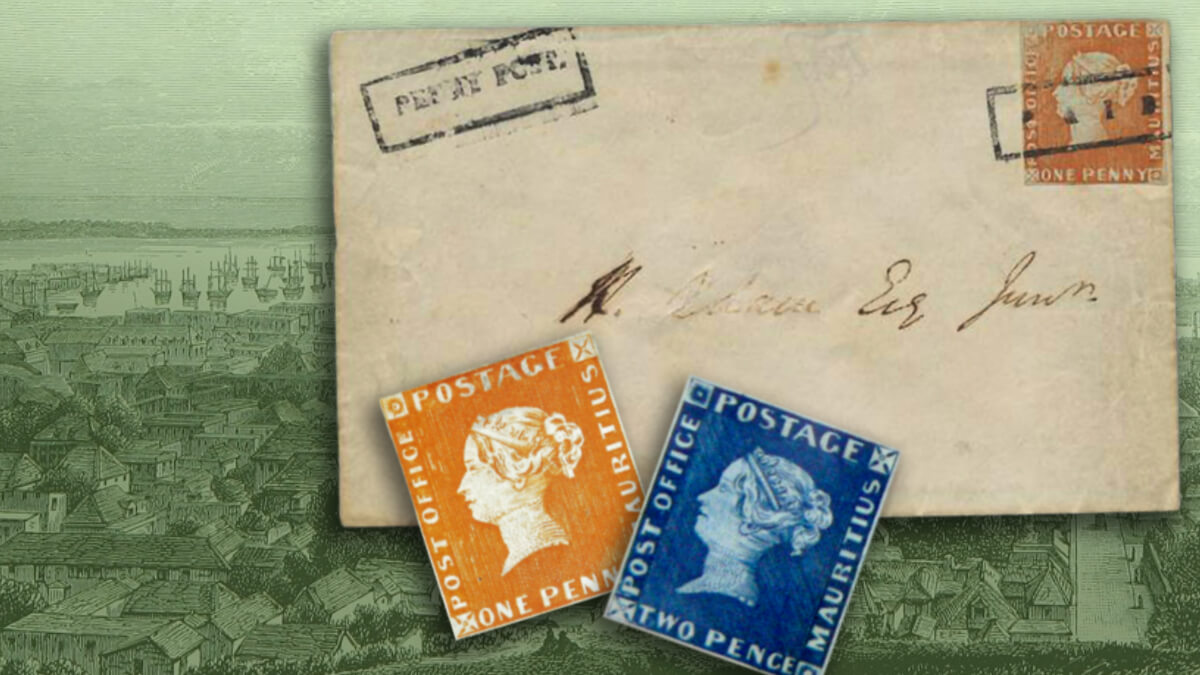 In colonial Mauritius of the 1840s, Lady Elizabeth Gomm, the Governor’s wife, was much admired around the capital, Port Louis, for her lavish balls.

In 1847, a young man, Henry Adam, was lucky enough to be invited to experience one of Lady Gomm’s balls for himself. That invitation proved even luckier for him fifty years later.

Lady Gomm was an enthusiastic participant in the life and development of the colony, and saw fit to invite people to her landmark fancy dress ball that year by using the recently established postal service. She slapped a few recent stamps on the envelopes containing her invitations, and off they went.

And by ‘recent stamps’, I really mean it. In 1847, postage stamps were still a new idea. Mauritius was only the fifth country in the world to issue them, and the first colony in the British Empire to do so, preceded only by the mother country itself.

Mauritius’s first two stamps were primitive little numbers bearing an image of Queen Victoria. Five hundred were printed of each of a one-penny orange-red and a two-penny blue design.

Twenty years later, stamp collecting was really taking off as a hobby. A few examples of Mauritius’s early stamps surfaced in Europe, intriguing collectors. In the ensuing years, early Mauritian stamps became some of the first philatelic rock stars, as the search for this scarce and exotic material inspired something of a gold rush. The hunt was on!

Extraordinary prices were paid for individual stamps and for the few covers that surfaced with those stamps on them. Some of those covers were said to have held invitations to a ball held by the Governor’s wife. Back in Mauritius, Henry Adam was now in his seventies and had lived all his life in the colony. He must have fondly remembered Lady Gomm’s balls, because he went and dug through his archives… and voila! There it was. He found the envelope that once contained his invitation to the grand ball of 1847. It bore a bright one-penny red stamp.

Adam sold his cover to French stamp dealer Théophile Lemaire in 1899. He reportedly asked for his surname to be obliterated from the front of the cover. He received £680, a pretty handy sum for the day, and one that totally justifies me continuing to stash away every letter I have ever received in my life.

The fascinating story of Lady Gomm and her balls, and Henry Adam, and the hunt for the earliest Mauritian stamps is very engagingly told by Helen Morgan in her book Blue Mauritius, which I wholeheartedly recommend. (I credit that book for some of what you’re reading here. I also referred to the catalogue compiled by auction house David Feldman SA for its ginormous Mauritius auction held in November 1993.)

But why am I telling you about all this now? Because this blog has a proud tradition of bringing you the latest philatelic news months after it happens, and just moments ago back in June, Henry’s cover became the new Heavyweight World Champion of stamp collecting.

Covers from Lady Gomm’s ball are almost as hard to find as that other famous Mauritian resident, the dodo. But, unlike the dodo, at least three ‘Ball covers’ still exist. One now resides in the British Library; one lives in the UK’s Royal Collection. Henry’s letter hit the auction block at Auktionshaus Christoph Gärtner in Germany on June 26 as the only Ball cover in private hands. Bidding started at a cool four million euro, and ended in a hammer price of… €8.1 million!!

If you follow my obsession with top-end auctions, you’ll know that that wasn’t the final price. Throw in the 23.8% buyer’s premium charged by the auction firm, and we have €10,027,800. I notice in Gärtner’s sales terms that they also add a cute €2 per purchased lot, so I can only assume the final invoiced price was €10,027,802.

We can now put behind us the recent, slightly disappointing sale of the world’s most valuable stamp, the 1856 British Guiana one-cent magenta. The top end is back, baby! (And, as I always like to remind you, covers beat stamps, hands down, every time.)

The new owner of this Ball cover was reported to be a ‘German-speaking collector based in Europe’. What does that mean? A German collector trying to pretend they’re Austrian? A Swiss collector who’s really proud not to speak French or Italian? A Bulgarian who’s really crushing the Diamond League on the DuoLingo app?

Anyway, what’s interesting to me is that this German-speaking collector has bought this Mauritian cover (and British Commonwealth rarity) from a Singaporean. The appeal of these Mauritian classics continues to transcend national and linguistic boundaries.

Could any other item come close to knocking this new golden child off its perch? The most likely contender is another Mauritian former title holder, the Bordeaux cover, which magnificently bears both a one-penny and two-penny stamp, and last sold at a 1993 Swiss auction for CHF 6,123,750 (equivalent then to about USD 4.1 million). Add thirty years of inflation into that figure and we’re probably looking at another championship title fight.

Another contender might be a block of the 1897 Chinese Qing Dynasty ‘Red Revenue’ small one-dollar stamps, bought off-market in 2009 for a reported 120 million yuan (USD 18.8 million). That figure is complicated by another stamp being included in the sale.

For more on these early Mauritian issues, take a look at the Blue Mauritius companion. It’s a website published by Blue Mauritius author Helen Morgan in which she shares much of her research. I also touched on Mauritius’s exalted status in the stamp world in a post from 2020 when some slightly-later-but-still-early stamps went up for sale.

Soon, I’ll go back to writing about the kind of stamps that most of us can afford. But in the meantime, through stories like this, we get to collectively appreciate the enduring imprint left on philately by Lady Gomm and her big ball.

Thanks to reader Michaélus who made me aware on Twitter that Mauritius actually depicted Lady Gomm’s big ball on a stamp back in 1978, along with an illustration of a ball invitation cover. From what I can tell, there was a reprint in 1983 with that date added at the bottom.

But that’s not all! While looking into that stamp, I discovered that, in 1997, Mauritius released another stamp depicting the ball! Typically for the era, it seems no one ever bothered to record any sort of image of Lady Gomm (I’d already looked for one and failed), so her husband the Governor dominates the scene. Booo! Nonetheless, I hope that one day I throw a party so awesome that my country is still reliving it on stamps 150 years later.

Thanks to reader Dustin who used the comments below to alert us to a German issue that’s set for release on September 2 this year. As part of a Stamp Day series commemorating ‘Philatelic Treasures’, it features the Bordeaux Cover (and a magnifying glass in the selvage, a nice little shoutout). Perhaps something for our mysterious German-speaking collector to content himself with until the real thing hits the market again.

While I’m at it, I should also thank philatelic YouTuber PostalPleasures for reminding me on Twitter of the song ‘Big Balls’. It’s by AC/DC, a band that is probably my nation’s biggest contribution to rock’n’roll other than myself. It’s a song about a high-society gentleman who clearly enjoys impressing people with his balls, indeed boasting that he has the biggest balls of all. Why, Lady Gomm might as well have written the lyrics herself.

For more historical intrigue, stamp love and dumb jokes, hit the Follow button or submit your email to read new Punk posts as soon as they appear! You can also find me on Facebook, Twitter, and Instagram.

“But I can’t afford this stuff!”

You might not be able to bid today, but top-end auctions can help you spot an elusive rarity tomorrow