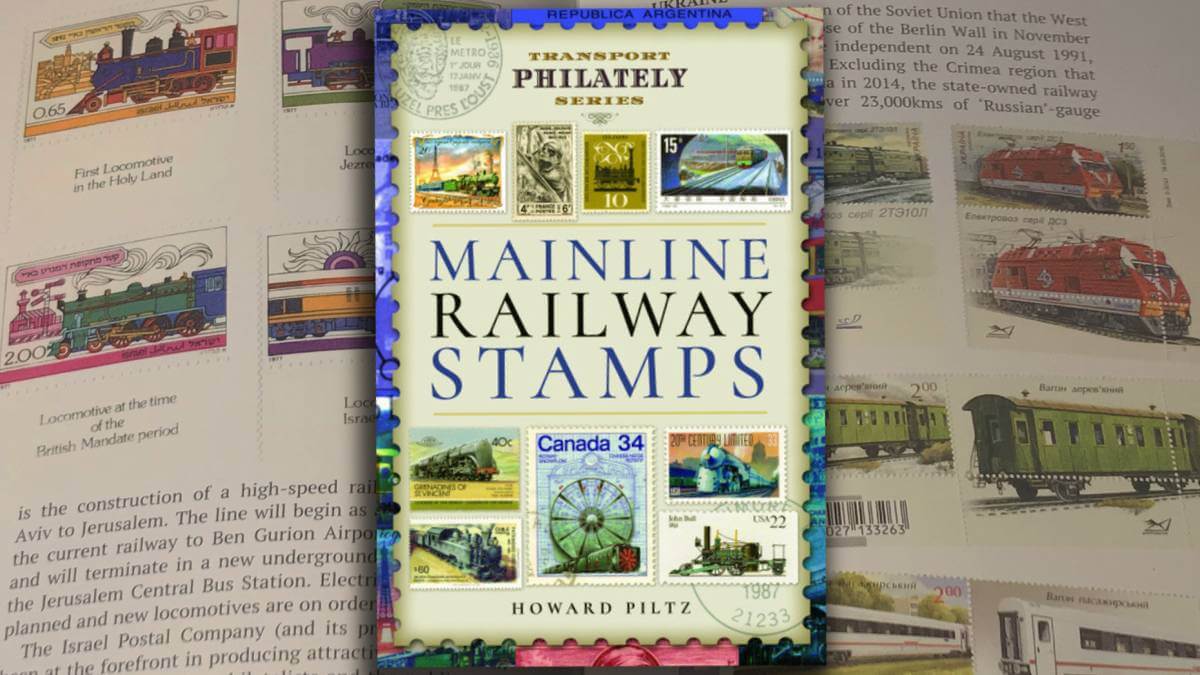 A few months ago I received a new book: Howard Plitz’s Mainline Railway Stamps. As I’ve made clear on the blog, I am bang up for receiving free stuff, so I’m delighted to return the favour with this site’s first ever book review!

Howard is a lifelong philatelist and railway aficionado, and this book is the sequel to his Narrow Gauge Railway Stamps of 2018 (which I haven’t seen). He has chosen a dangerous path in life. What if he made a minor error? The consequences of incurring the combined wrath of philatelists AND trainspotters are too gruesome to contemplate.

Well, Howard can relax for now. This philatelist and secret train fan was all aboard as soon the box was opened. This is just a beautiful book to hold. The size and weight feel satisfying in the hand. It’s handsomely put together, and the vibrant images leaping from the page during a flick-through just made me want to tear straight in.

The feast for the eyeballs continued inside, with colourful railway stamps exploding off the shiny paper stock, illustrating the potted railway histories told around them. The book makes clear at the outset that it’s not a catalogue of railway stamps for thematic collectors; it is not exhaustive in either stamps or railways, and nor does it attempt to value the illustrated stamps. On the railway side, its vision is commendably global, but on the stamp side, it wisely eschews the meaningless postal agency wallpaper and fraudulent collector-bait.

Mainline Railway Stamps is tremendously readable, if you can forgive Howard’s occasional meandering sentence bordering on stream-of-consciousness. (And whom among us is innocent of that?) You could devour it in a solid few hours, or dip into it in over a cuppa as life allows. And while the appeal to philatelists is obvious, it would make an attractive option if the railfan in your life is as difficult to buy gifts for as the one in mine. (Yes Dad, that’s you.) The spotlight in this volume is on mainline, mostly broad-gauge railways, with a selection of preservation lines thrown in, along with their cinderellas. And Thomas the Tank Engine hasn’t been forgotten.

As the child of a train fanatic, I inherited a love of smelly old steam engines, but I’ve also been subjected to more technical specifications than I’ll need in my lifetime. (Admittedly, I get the same way over Australian decimal postal rates. I am available for your next dinner party.) Howard’s impressive achievement with this book – against all odds – is to enthuse about trains and stamps without dwelling on details that would cause the average reader’s eyes to glaze over. A note here and there on gauge sizes or postal developments is to be expected, but the text is informal in tone and never gets bogged down. Rarely spending more than a paragraph on any railway service before moving on, the reader is kept engaged, and alert to the next discovery.

And discoveries abound. A real joy of this book for me was a constant stream of little wow! moments. Did you know that Switzerland’s Brienz Rothorn Bahn tourist railway (as featured in the stamp above) was never electrified, with most trains operated by steam locomotives built in the 1890s – so it followed that the same company could supply new steam locos a century later in the 1990s? Did you know that due to track gauge discrepancies, trains leaving Spain for France can adjust the distance between their wheels on their axles?

Can you believe that in 1950, Cuba released a set of stamps depicting a train accident – and then featured one again in a 1987 stamp-on-stamp? Piltz was unable to dig up information on that incident, or on the two men depicted. But he got me intrigued. Thanks to an old bulletin I found from the Cuban Philatelic Federation, I can tell him they were drivers who lost their lives in a 1947 derailment on the San Luis Oriente line. The original issue concerned a retirement fund for postal employees.

I’m already a collector, of course, and yet this book represents trouble. I’ve always verged on being a ‘trains on stamps’ kinda Punk. Adding this book to my shelf will be like racking up cocaine in front of a model. At the very least, I’m on now the hunt for this Japanese issue marking the 50th Anniversary of the Shinkansen. I like a miniature sheet that screams ‘Get out of my way!’ Stick these stamps on your mail and you can rest assured it’ll get there on time.

Publishers Pen & Sword bill themselves as military and nostalgia experts, but they might be carving out a niche for themselves in the philatelic market. There exists an enormous gap between entry-level ‘How to be a stamp collector’ books, and serious-philatelist catalogues and monograms on specific issues. Magazines and the internet fill that gap somewhat (hello!). But amid the hand-wringing over the  “future of the hobby”, a few more books as attractive and as engaging as this, pitched at normal human readers, might trigger a philatelic itch in a few. (Especially if they were to cover subjects that are, dare I say it, slightly less old-manny.) Mainline Railway Stamps generously ends with a chapter that puts the trains aside and gently introduces the reader to the attractions of stamp collecting. It’s a lovely touch.

I’d like to thank the good people at Pen & Sword (which IS mightier? Sounds like they’re on the fence) for allowing me to preview Mainline Railway Stamps. If you think this effusive review was part of the deal, please know that I warned them that I owe it to my readers to be critical if I felt the need, and they were OK with that and sent it anyway. They must have known they were onto a good thing.

One thought on “Choo the fat with ‘Mainline Railway Stamps’”