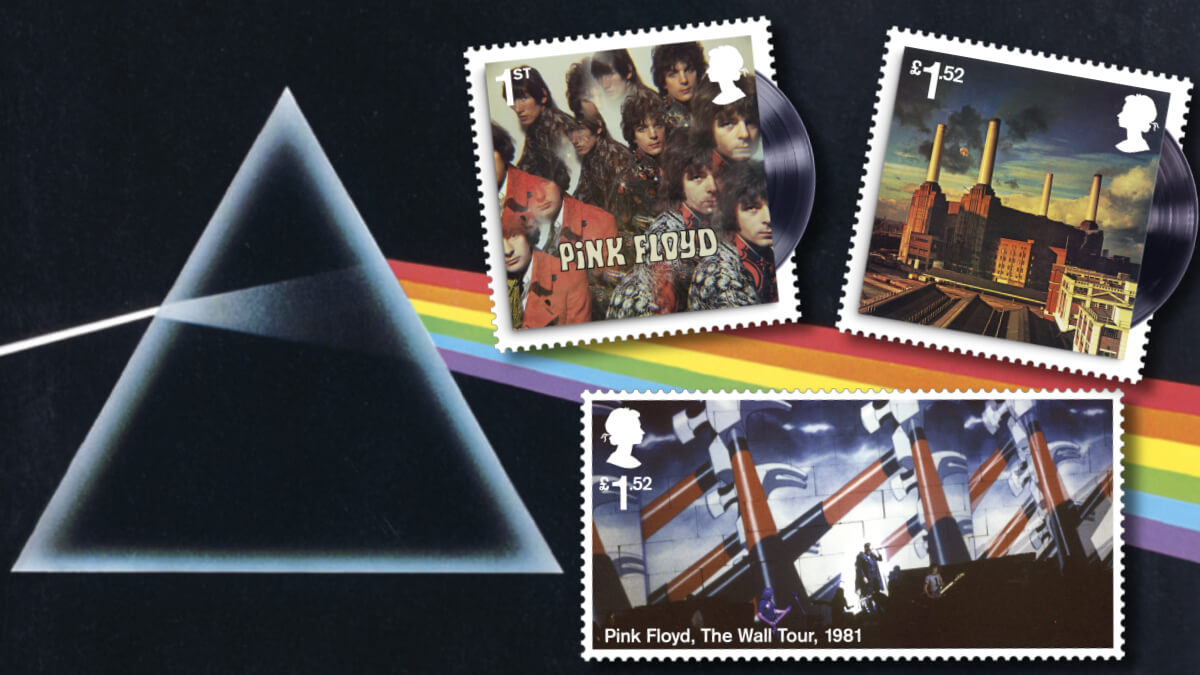 I love it when music, design and philately collide. And it’s happening again, thanks to the Royal Mail. Attention cool uncles and that boring guy who used to corner me at university house parties: Pink Floyd is being immortalised!

Last year marked the 50th anniversary of Pink Floyd’s founding, though it feels like they’ve been around for a lot longer, since every David Gilmour guitar solo goes for 50 years in its own right. Royal Mail’s tribute issue clocks in at no less than 10 stamps, which, much like a prog rock album, is more than anyone asked for and a lot more than was necessary to get the job done.

…plus a minisheet comprising four stamps marking live performances by the band:

We’re starting to see more and more album covers on stamps. No doubt postal administrations need to recruit younger collectors as the old ones die off. And what better way to pique interest among freshly-retired baby boomers than to start bunging their childhood on stamps?

Luckily for all of us, whatever you might think of the musical content of an album, they tend to look sensational in this new artistic context. The ominous Animals cover loses nothing in effect, even though it’s a stamp, not a prog rock cover, so we can’t fold out the other half to see the clouds rolling in over Battersea Power Station. I wonder how many letter-senders will notice the flying pig.

For the benefit of connoisseurs and my uncle, the other albums featured are The Piper at the Gates of Dawn, Atom Heart Mother, The Dark Side of the Moon, Wish You Were Here, and The Endless River. There are a few firsts among them. We’ve seen livestock on British stamps plenty of times before, but I don’t think we’ve seen a cow mooning us with quite so much glee as the one on the cover of Atom Heart Mother. And I haven’t checked, but I’d bet that this is the first time a stamp from the UK, or possibly anywhere, has featured a dude on fire.

If you’re loving this, you might like to chase up Royal Mail’s 2010 Classic Album Covers issue, which included Pink Floyd’s Division Bell as well as Bowie’s Ziggy Stardust cover which I featured on this site when the great man passed. This new issue retains that lovely touch of having the vinyl peeking out from behind the cover, evocative of both the era, and of poor record storage.

Maybe it’s because they’d already used Division Bell that The Endless River snuck onto a stamp. It only came out in 2014 and got pretty middling reviews (“ghastly faux-psychedelic dinner-party muzak” – The Independent). Apparently, being the most pre-ordered album of all time on Amazon UK is all it takes to get a stamp these days.

I’m also not so sold on the live performance stamps. I know Pink Floyd were renowned for their live shows, but despite the extra-wide dimensions, I find them a bit, y’know, dull. Somehow, a tiny piece of paper just doesn’t capture the experience of being there. Though The Wall one comes up OK, mainly because of The Wall.

If you currently have smoke coming out of your ears and you’re screaming at your gadget, “Why is a self-described ‘punk’ featuring Pink Floyd on his so-called ‘punk’ blog?” then I completely understand. The Floyd are, of course, intimately tied up with the overblown, overproduced sounds that punk was reacting against. The first thing I would say is that you’re taking my moniker far too literally. The second thing I would say is, I don’t write about music, I write about culture and design. And the third thing I would say is, read this article I stumbled across at Coke Machine Glow, which argues coherently that Pink Floyd’s Animals was, in retrospect, one of the best punk albums of the 1970s.

Then go and have a conversation with the boring guy who always cornered me at university house parties.

The Pink Floyd stamps are out on July 7.

2 thoughts on “You crazy diamonds”