Someone in the bowels of Australia Post has been playing a little game, perhaps for years, and I’ve only just noticed. Now I’m addicted.

A quick explainer for normal people. When post offices issue new stamps, they also release a range of related products postmarked on the date of the issue’s release. They’re known as First Day of Issue (FDI) products. The best-known is the first-day cover (FDC), a decorative envelope bearing the new stamp(s). In the olden days, first-day covers happened by chance; then collectors made it a thing, and now many postal administrations (‘countries’ to you) issue official first-day covers. Modern FDCs are often extremely attractive. They have to be, because a FDC collection is both cumbersome to store and almost impossible to recoup your money on. So you might as well enjoy looking at them.

Here in Australia, official FDI postmarks usually reflect a location relevant to the topic of the stamps. It follows that on issues of formal national significance, the postmarker in Canberra burns more rubber than Shane Warne on a county cricket tour. (Enjoy researching that analogy, my American friends. x) 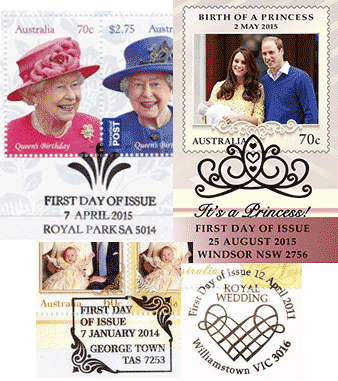 But here’s what I’ve just started to notice. When the stamp issue isn’t location-specific, the philatelic boffins at Aussie Post reach for their postcode book and look for the post office with the perfect name for the FDI postmarks.

It’s easy with royal issues. Our nation’s historical obsession with the Crown, combined with the Royal Family’s environmentally-friendly recycling of given names, means ROYAL PARK, WILLIAMSTOWN, GEORGE TOWN, WINDSOR and ELIZABETH have all had a look-in lately. Royal FDI postmarks are shaping up to be Elizabeth’s biggest industry once they shutter the Holden car factory.

MERRYLANDS has in recent times overtaken CHRISTMAS HILLS as the Yuletide postmark of choice. In a cute twist, an issue encouraging kids to write to Santa was postmarked DEER PARK.

But away from regular themes, it gets more fun, and you never know which two-horse town might receive this national honour. A few recent selections I would describe as ‘pleasantly serviceable’ include the following combinations of theme and postmark:

The good people at AP must have thought all their wishes had come true when they hit on FAIRY MEADOW for the Mythical Creatures issue. And wasn’t VALENTINE handy for this year’s adorable Love Is In The Air release?

Sadly, they sometimes take it too far. Look at these examples:

NOW HANG ON, AUSSIE POST. You can’t just type part of a word into your online location search and pick the closest hit! HASTINGS is not a ‘thing that stings’. Hastings is a place that bores teenage residents on the shores of Westernport Bay.

What was wrong with BLACK SNAKE, BEES CREEK, or my personal favourite, THE BIGHT?

Luckily, this laziness is mitigated by a recent run of choices so inspired that they lift the FDI postmark from beyond mere serviceability and into the realms of genius. Some of the following examples inspired me to give this little-recognised corner of Aussie Post the love you’re reading right now.

Take the recent Solar System issue that set new readership records at this blog in the last month. (Gosh, did it? I didn’t know! Thank you guys!) A close inspection of the FDC reveals a postmark from the western Melbourne suburb of… SUNSHINE!

This marks the first time in living memory that anyone has gone to Sunshine to obtain something that wasn’t cooked in a clandestine laboratory.

Before that, we had the Signs of the Times issue, celebrating neon artwork. The postmark: BRIGHT.

The mountain hamlet of Bright has probably never even seen neon signs. I’d be surprised if it has electricity. (I can say that about them. What are they going to read it on?)

Then last week, we had the Bicycles issue. Check out the postmark.

RYDE. Ryde’s been used at least once before, on the Capital City Transport issue of 2012, but clearly it’s perfect here.

Special mention to the Top Dogs issue of 2013 for MOUNT BARKER. And who says Australia Post is not above a pun? Here’s a close-up from the FDC of the 2012 Medical Doctors issue. 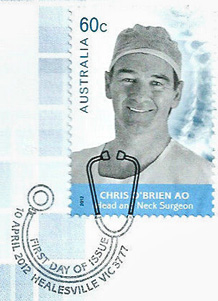 I tried to ask Australia Post who is responsible for this genius. The Philatelic Bureau was only authorized to sell me things, not explain them, and my enquiry to the media contact email disappeared faster than a registered parcel tossed on your front porch from a passing postal contractor’s van. However, my enquiry to the new Australia Post Collectables Twitter account had a response in about 30 seconds. That is incredible customer service, and I hope they know that when I inevitably slag off some of AP’s other dubious ‘collectibles’, it’s nothing personal. Follow them! For the record, “…the postmarks are decided upon by the team that develops the stamp issue, who are part of the broader Philatelic team.” Well, whoever you are, rest assured that at least one person out here appreciates your hard work. x

Exciting update! This exposé was noticed by Lucy Battersby, a reporter for Australia’s Fairfax newspapers, who picked up the theme and ran with it! For some background on the funny postmarks and a few more examples, click here!

3 thoughts on “Cracking the code”