Helloooo! Sorry it’s been a while since my last post. I’m going to make up for my stony silence with loads of pretty pictures, inspired by Australia’s Nostalgic Fruit Label stamps, over which I’ve been soiling myself since their release in June.

They celebrate the paper labels that used to be slapped onto the wooden fruit crates in the olden days before Styrofoam boxes.

What I love about these stamps is that they retain the microscopic details of the original labels. I wonder how many of the three people still using stamps will take a moment to appreciate the artist’s work seen, for example, on this River’s Pride label, and take in the fenceposts, the orchard and the veining on the half-peeled orange.

If you, like me, are a little fascinated by oldey-timey culture, it’s not out of the question that something would appeal to you about both these designs and also ye olde schoole world of stamp collecting. You may have been given the impression that it involves a lot of old stamps with kings and queens and presidents on them that cost a lot of money. Well, I have good news. There are no rules. We collect whatever the heck we want. And one could do worse than start with collecting vintage graphic designs on stamps, because it’s so hot right now.

Australia Post has been on a nostalgia kick for a while. A couple of highlights: 2007’s Nostalgic Tourism issue, which included poster art from the 1930s, when poster art was surprisingly big. Here’s Percy Trompf’s At The Beach. It depicts the exact opposite of where I am as I type this article here in Melbourne, shivering through a wintry Antarctic blast. Still, it rains more in Sydney, regardless of how many beaches they put on posters. Never forget that.

An original print  of this 1939 poster sold for $US 15,000 at NYC’s Swann Galleries in November 2015, on an estimate of $7-10k. If only the buyer could have known that he or she could have paid only about a buck for this masterpiece from a stamp dealer.

Another recent favourite of mine: 2014’s Nostalgic Advertising issue. (Are you sensing a theme?) This featured classic advertising posters. The minisheet had them plastered on a vintage brick wall (in direct contravention, I note, of the warning to Post No Bills).

I could write a whole entry on USPS’s sumptuous 2014 Vintage Circus Posters issue, and maybe one day I will. It featured eight stunning classic circus posters. There was even a major missing colour error discovered. I’ll tell you more about it sometime. For now, just admire the pretty lady and freak out at the clown.

Poster art need not be the reason for a stamp issue’s release, of course. It can pop up in the service of another cause. So it was with the USA’s Vintage Black Cinema issue in 2008. Early Afro-American representation on the big screen was the subject; the movie posters were the messengers.

In 2013 the Royal Mail celebrated 150 years of the London Underground. That partly included four stamps depicting advertising posters from over the years, three to a stamp.

Moving out of the Anglosphere (something I need to do more often), if you’re warming to this posters-on-stamps idea, you’ll want to check out the Europa stamps of 2003. Europa is the Eurovision of philately. Lots of European countries issue a stamp on a common theme to celebrate how fraternal and peacey and Europey they are. Then the locals vote for their favourite, and the English vote to leave because Foreigners. The theme in 2003 was poster art, and 57 countries submitted 97 stamps. Monaco won that year with a stamp depicting a topless chick sitting on a diving board (quel cliché!). But I found that one quite dull, so here is a French man dancing with a cow. 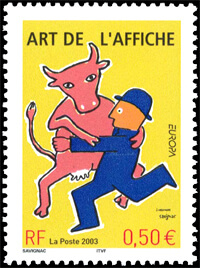 Running parallel to this fad for vintage designs is a bit of a thing for vintage-esque design in stamps, where it all looks a bit retro but isn’t really, like shopping on Etsy. In 2015 New Zealand celebrated its food culture with its Kiwi Kitchen issue, a massive 18 stamps of which here are two.

Artist Jason Kelly actually painted the designs onto wooden panels because they don’t have Photoshop effects in New Zealand. Weirdly, they included pavlova, which everybody knows Australia invented just like we invented Phar Lap and the Finn brothers.

2015 also brought us the USPS’s Summer Harvest issue. It kinda brings us back to where we started with the Australian fruit labels, only these ones were generic. Not so much celebrating the design, as celebrating the fruit, with the design as an artistic choice. Still, it’s definitely retro in the sense that it’s been decades since any American bought a fresh piece of fruit. For further reading, here’s an interesting Atlantic article talking about the role that the nostalgic designs specifically play in the marketing of these stamps.

A pedant might point out that if you were really interested in vintage designs, you need not buy modern stamps; for maximum authenticity, you can buy old stamps that were designed when vintage was now. That pedant would be me. But there’s a hair to be split; those stamps would depict vintage stamp designs, not vintage designs from elsewhere in a culture. They weren’t putting fruit boxes and black cinema posters on their stamps in 1925. It just depends what kind of design you’re into. Like I said: collect whatever the heck you want. I’ve got your back.

If I were you, I would link to this article on my socials and write “These designs are so beautiful, it almost makes me want to take up stamp collecting!” That way you get to enjoy the reflected glory, while retaining an air of disaffected cool. But hey, you write whatever the heck you want. Follow me on Facebook, Twitter, and Instagram!

4 thoughts on “Everything old is new again”