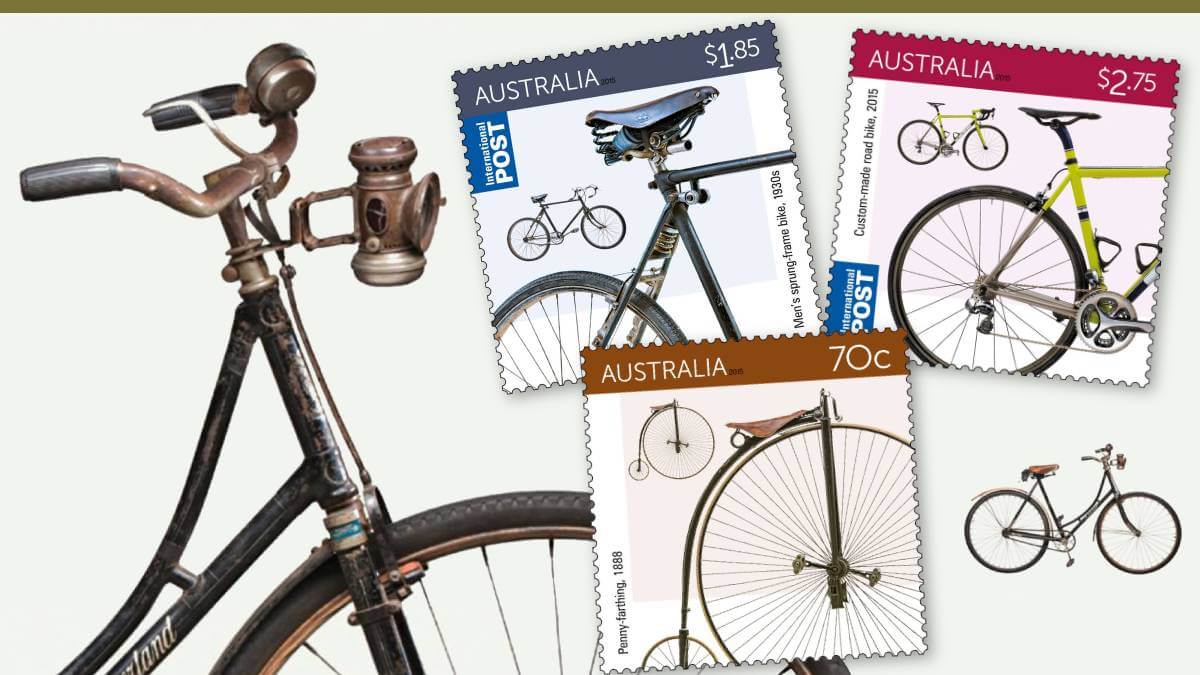 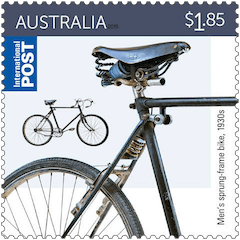 I’ve become a bit of a new issues service for Australia Post lately. I didn’t mean to. It’s just that AP has been in great form. Also, I’ve only written about the stuff I love, not the issues that have left me feeling meh. This is the opposite of what writing on the internet is meant to be. You’re meant to ignore good things, while ensuring that anyone in public life who has done wrong knows all about how personally you have taken offence and how much you hate them. (See: many other entries on this site.)

I really like this week’s Bicycles issue. It’s unusual for me to be moved by such stark designs, but that’s just the contradictory kind of guy I am and if you don’t like it, you’re going to have to deal.

There’s something olden-daysy in the font used for ‘Australia’ and the value. I see a delightful visual consonance between the ‘0c’ of 70c and the wheels of the penny-farthing. Could it have been deliberate, or have I had one too many after-dinner rieslings? 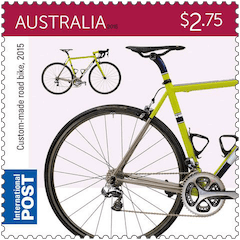 My first thought when I saw this issue was that it could almost be a UK issue. I mean that as a compliment. In all my years as a collector and as someone who may or may not be involved with design, I’ve just never encountered a country with such a consistent output of quality stamp designs as the UK, across such a variety of styles and topics. Other countries should look to the Royal Mail as inspiration. The UK is the only country whose new issues I am tempted to collect. I don’t, of course, because Royal Mail is as guilty as any other postal administration of churning out product to make a quick buck off stamp collectors, and I’m not going to fall for it. Oh, OK, I’ll take the Star Wars stamps but IT ENDS HERE.

My pro-UK comments, of course, don’t include the interminable ‘Queen’s heads’ design. I’m going to start a philatelic punk band called Rage Against The Machin.

I assure you that was a very funny pun, but to get it, you’d have to be into both British Commonwealth philately AND 1990s rap metal. If you are the one person on the whole Internet who enjoyed it, get in touch below and say hi. Incidentally, I’m happy to point out that the title of this page is cleverer than you realised at the time.

Where was I? Excellent choice of subject bicycles – not all obvious candidates. I particularly like the 1910 Ladies’ Safety Bike. Safe, I’m guessing, until the headlight spills burning kerosene on your billowy lady-dress.

The simplicity of these designs leaves space for the subjects to sing. The muted colours are a lovely change from the norm. This is class and elegance. Well done Aussie Post and designer Sean Pethick.

13 thoughts on “Pedal to the metal”