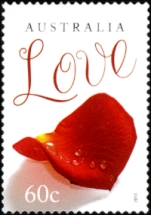 But it just so happens that most years, AP releases love-themed stamps just weeks before Valentine’s Day. How amazingly convenient!

I’m not sure when ‘Love’ became so Australian that it deserved to be featured on our stamps. Asylum seekers on Manus Island would surely think we were playing mind games if a Love stamp turned up on a letter delivered to them as they queued up in the sun to ask permission to apply for the tampon raffle or to not get beaten up by guards that week.

But of course, these stamps aren’t celebrating an Australian phenomenon; they’re celebrating a worldwide trend among postal administrations to encourage romantics to put some thought into the stamps that will adorn their love letters, while encouraging stamp collectors to put their hands in their pockets and give postal administrations more money. Collectors are used to this by now, but if the gimmick encourages any thoughtful written communication from Romeos and Juliets in this internet age, then it’s all right by me.

(Australia isn’t the only country in on this game. I’ve mentioned some other countries’ contributions in a separate post here.)

I might be the target demographic, but Australia’s Love stamps often leave me cold. I’m over the girly pinks and the constant barrage of roses. (Not in real life, of course. Keep ’em coming.)

They’re also highly susceptible to a scourge infesting modern stamp design, which is WRITING the THEME of the ISSUE in BIG TYPOGRAPHY so that you KNOW what it’s ABOUT. 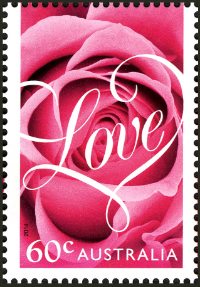 Oh! The pink rose means LOVE! I get it now.

So it’s with great delight that I send a big Valentine’s Day kiss to the designer of this year’s not-Valentine’s-Day-how-dare-you-suggest it issue. (I’m looking at you, Jonathan Chong.) Aren’t they, almost literally, a breath of fresh air? 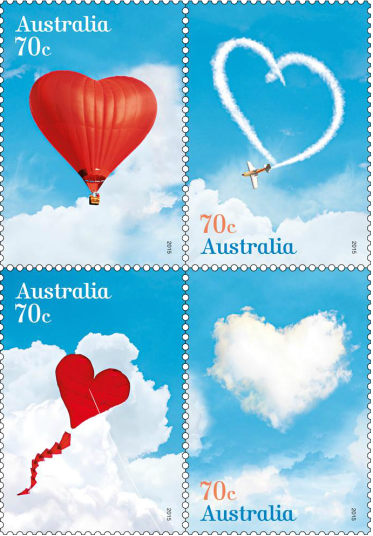 Fittingly, the issue is called Love Is In The Air. If you look closely, you can see John Paul Young in the balloon basket. He’s waving! Hello JPY.

The loveheart motifs and bright primary colours would certainly tug on my kitestrings, were I to be so lucky as to receive a Valentine’s Day card in the post HINT HINT. 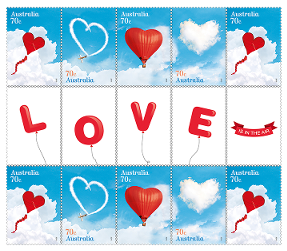 One thing intrigues me. Four different designs? Who needs four Valentine’s stamps? AP is clearly pitching at Lotharios (or Lotharias) for whom one love letter is not enough. What are they doing? Sending one card to each of four potentials and then choosing the best option in some sort of Tinder-inspired postal experiment?

But I suppose options can’t hurt. For every willing young lady who’s really into clouds, there’s probably another one who is really into aerobatics.

The stamps make for a lovely gutter strip too. Look for it in your local post office. It has LOVE written in big letters in the gutter, in case you didn’t know what the red hearts were all about. Old habits die hard. 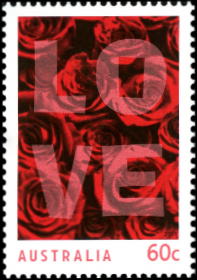 2 thoughts on “Happy (not quite) Valentine’s Day”

Austria loves chucking crystals on its stamps, and for Christmas 2019, a crystal was the ‘star’ of this Christmas tree stamp. Looks like that time my Auntie Trish decided old CDs would make great Christmas decorations and we all had to pretend to agree. 🎄💎🇦🇹 #christmas #christmas2019 #christmastree #austria #osterreich #stamps #stampcollecting #philately
This week, readers of the blog have been following my investigation into how Ed Sheeran’s stamp collection turned up as a big-ticket item in a forthcoming American stamp auction. Looks like the mystery has been solved! Pop on over and have a read... #edsheeran #stampauction #stampauctions #stampcollection #stampcollecting
‪How did these alpacas end up in a nativity scene with a giant hologram diamond? Find out in my freshly-posted farewell to 2019 over at https://punkphilatelist.com #alpaca #stamps #stampcollecting #philately #christmas #nativity #hologram #diamond #cocoskeelingislands #australia
Is THAT the time? I’d better squeeze in one last blog post before 2020 kicks in! This week, a look at the technology behind some of this year’s Christmas stamps prompted a trip down memory lane, to that time I brought a little razzle-dazzle of my own to a Christmas letter... #christmas #portugal #natal #technology #austria #australia #cki #design #graphicdesign #stamps #stampcollecting #philately #illustratedcover
This angle captures perfectly the quiet majesty of the volcanic neck that dominates the black sand beach at Piha, near Auckland. It’s like the Sphinx, but 16 million years older. 🇳🇿 #lionrock #piha #auckland #rock #rocklegends #nz #geology #aotearoa #newzealand #geologicalformation #rockformation #rocks #stamps #stampcollecting #philately #design #graphicdesign #pareidolia #photography #landscapephotography #landscape
Photographers love Motukiekie Beach with good reason: this is just one of several startling sea stacks that watch the sun set over the Tasman Sea. This is one of my favourite Kiwi Rock Legends because I empathise. I too love to watch the sun set over water, and my hair is also a bird’s nest. 🇳🇿 #motukiekie #seastack #rock #rocklegends #nz #geology #aotearoa #newzealand #geologicalformation #rockformation #rocks #stamps #stampcollecting #philately #design #graphicdesign #pareidolia #photography #landscapephotography #landscape